Customer paid over  $500 for this kit coop an it was falling apart while they were trying to put it together. 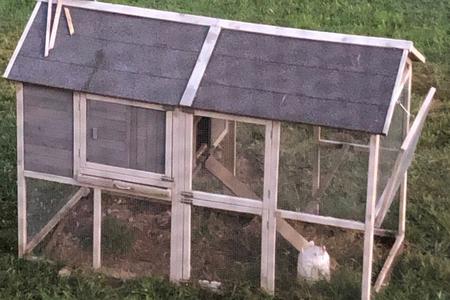 Look at the framing of this coop. Regular Pine framing lumber an not even a full 2X4 there 2X4's ripped in half that why the wall has a big sag in it. Try Washing the inside of this coop an it will rot out in a year or to, we use full PT 2X4 s not lumber ripped in half to save us money . Our smallest coop weighs more then their largest being built in NC.

​We build them to last 15 years an know they will last that long.

Don't waste your money on one of these kit coops this one lasted 5 months.

Coops like this do not last very long they have plywood or wafer board inside for floors egg box's etc an if you get them wet by cleaning them they Rot out. With these type coops you will need a run an now they are not portable so if you live somewhere an you want to move your coop to fresh ground you won't with these.they are good for a few laying hens at most you can not go inside of them to clean them out .There very hot inside in the heat of summer.We have in 9 1/2 years replaced coops like this because customers could not do much with them. Why waste your money on something that will last a short time an an is not easy to clean. Its a shame to see people waste their hard earned money on something that does not work an will fail they may look cute but for chicken coops are useless.An you will spend from $400 to $650 on one of these,only to discard it in a short period of time because its not working for you. Chickens like to be on the ground to scratch the ground for bugs etc. So this type coop is useless if you live in the city limits as you can not free range chickens unless you want to chase them all over your neighborhood an upset your neighbors. even in the country setting you will have to construct a run of some sorts to make these work an an now you can't move the coop because you have a run attached to it to allow the chickens to have a new area on the ground. a lot of people do not have any idea what will not work for them an raising hens an being around them for 40 years we only sell an build coops that look good,easy to clean an move an will last 15-20 years.

Elaine From Rougemont,Nc got her new 6X14 today with skid system an best nest box, she told us about this coop she bought less then 3 years ago an its all rotting out an she told us the windows are useless no cross ventilation. the doors are falling apart on it,the lid to egg boxes are all rotted out an they used regular pine framing its even rotting inside the box part of the coop, she said you can't clean the box part of the coop out an told us it was built on site an she paid good money for it. A lesson learned those all in one coops with a box in them are useless.
1st  an 2nd pic is her new 6X14 we built to replace what she had that is falling apart,the rest of the pictures are the all in one box coop.
ype your paragraph here.

Questions you should ask before you buy a Chicken coop from anyone to save you money and problems down the road.

1.what is the Coop constructed from?  Is it PT pressure treated? Or KD pine Kiln dried Pine?

KD pine  will not last years outside in contact with ground and weather even if stained or painted it will Rot.

2. what kind of nails are used? We use Gal nails and screws in all coops, not Common nails and drywall screws.

3. Our roofs an walls are framed just like your house

4. we use a 40 year warranty roofing metal, not barnyard roofing from lowe's

5. add all these factors up and why would you pay any amount for a coop that will rot out and fail

6. all our coops from a 5X6 to a 6X14 are built the same,we  don't take short cuts, Our reputation is in every coop we build for customers,we have coops all over NC an Southern Virgina.

Below is a slide show of a KD Coop only 4 months old bought in greensboro an the customer paid over $600 for it was a 4X8,not built from PT,you judge the quality of this coop for yourself.